What self sustainability has in common with Agile? NTPM PART 2 Is it easier today to do the international business than 20 years ago? LIM 2013 PART II
Conference, Project Management
NTPM 2013 summary PART 1

Before conference delegates had a chance to participate in “The Project from Hell” workshop, designed by Peter Taylor and Michael Finer, the authors of “The Lazy Project Manager and the Project from Hell” and facilitated by highly experienced trainers Anna Erdmanska and Marzena Imilkowski.

It’s often said that mistakes provide great learning opportunities. In my opinion it’s much better to avoid mistakes in the first place especially while working on the projects. The Project from Hell workshop was a grand experience. From my point of view this training is helping project leaders to determine failure factors of a project in very unusual way. During the one day training session we were analyzing a failed project case study giving our recommendations to save project and ensure future success. I believe that this format has made the training more effective since I had a chance to ground the learning experience in a practical and experiential nature of the workshop. Ewa Gasior, ESC 2013 Project Manager, the workshop participant. 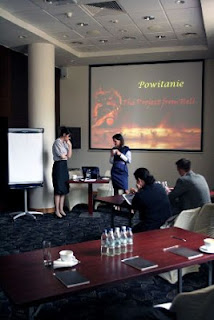 The first day of the conference was opened and closed by agile evangelists, Michal Raczka started with presentation “It’s not agile, it’s YOU!”

And  Ray Arell finished sharing his experience in implementing agile approach of work. We have also learnt that Ray’s 3 children use kanban boards to plan their daily activities! If you interested in using personal kanban read the blog.

As all presentations and workshops were so interesting it was difficult to choose which one to attend. This time I had decided to follow the risk management track. A workshop by Agnieszka Mrozik and Rafal Rudnicki started with a short introduction to risk management and followed by the groups- discussion on Terminal 5 case study. Some of you might know the case, but for those who do not know two quotations from newspapers – first just before opening the terminal and the second 3 weeks later.
“The new terminal delivered … on time and on budget by BAA, the airport operator, is one of the biggest infrastructure projects undertaken in the UK. Terminal 5 is a significant step, it is a fantastic piece of infrastructure. It will allow us to transform the customer experience. March 11th, 2008”
Pressure mounted on airport and airline bosses responsible for the chaos at Heathrow’s Terminal 5 on Monday as ministers accused them of damaging the reputation of UK plc and national pride. Criticism in parliament of the “fiasco” at the “4.3bn showpiece terminal came as the government revealed it would take up to a week for British Airways to return 28,000 misplaced bags to their owners. March 31st, 2008”

Success or failure” I thought failure till the time I met David Hancock, responsible for creating and delivering the risk management system for the Terminal 5 project. I got his point that companies do not really care about reputation as long as they make profit. The chaos at the airport lasted only for one day and BA predicted it but did not want to spent more money on additional testing as 6 month testing was already completed. Remember when planning risk responses consider 4Cs (Costs/Consequences/Context/Choices). Your choice is based on costs, consequences of doing nothing and context! 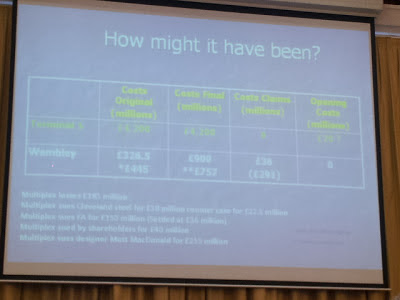 In his presentation David also introduced 3 types of problems:

Apart from T5, he also shared his experience from Olympics and Paralympics held in London in 2012, illustrating how risk was managed from the transportation perspective of getting athletes, officials and spectators to the Olympic park to enjoy the games and leave a great impression on all who came to the wonderful city of London and those that live there. An interview with David can be found here.
And last but not least presentation on risk management I want to share with you was “Hubris and Happenstance: the hidden risk of bias in projects” by Ian Whittingham, where we learnt that as project managers we are taught to focus on tangible risks, but we perform our projects within environments that contain a hidden, intangible risk, which is called bias.
9 hidden risks:
In summary, the great NTPM team, led by Przemyslaw Kotecki, provided the audience with the tools, the platform, the knowledge, the networking opportunity and the inspiration. Additionally in the evening the participants were invited to a networking event in Klub Atelier and  surprised by a tango lesson and performance by Iza Szoloch and Krzysztof Wojciechowski, teachers from Artorient dance school http://www.artorient.pl/.
Look for more in my next post-  PART2 coming soon, including Peter Taylor talking on project sponsorship, John Styffe sharing some tips on self sustainability in the work place and how this is connected to agile, Daniel Walsh.