English Summer/Winter Camps held by PMI Gdansk Branch since 2004 aims to take around 35 children from orphanages, foster and poor families for a two weeks English course holidays. Main goal is to learn English, but PMI® also tries to pass the knowledge from its field of expertise: project management.

This year it was decided to involve all the kids into a project which would be implemented by the kids during the camp. English Winter Camp 2012 project was named “Venice Carnival” and the aim was to organize a carnival ball. First the kids had a lesson during which the idea of the project was explained and the kids got familiarized with some key elements of the project such as scope and stakeholders, work breakdown structure and roles within project organization. The way to talk about project was customized to be appropriate for the kids at
the age range from 9 to 15 years old.
When kids knew how the work will be organized they divided themselves into teams, Project Managers were chosen and the work kicked off. They had made a list of tasks to be completed, placed them into time frames and had assigned persons responsible for every activity. Teamwork is crucial in every project, so we had planned some activities to help them to prepare for the ball. The beautiful Venice Carnival masks were created, the venue was decorated and the final presentations on the project work done by every team were prepared. 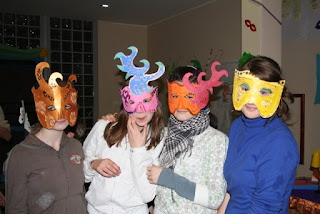 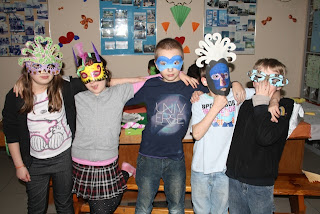 Every team had to introduce themselves and talk about how they were collaborating on a project. The jury had chosen the best team who had fulfilled all the requirements and has shown an excellent teamwork during the project. After the contest there was time for fun and celebration – a disco. Our first experience with teaching project management on the camp was great, the kids have a lot of potential and great ideas.
We decided to continue with “the project of the camp” during the summer edition. This time the theme was “A travel through Europe”. The aim was to gain knowledge about some European countries and to present the country during the closing ceremony of the camp. As in the winter edition, we have started with a class delivered by Kamil Gmerczynski and Aleksandara Skowron, PMI Gdansk Branch volunteers, division into teams and making WBSs.

We planned this at the beginning, so the kids had time to prepare during the whole camp. We had invited volunteers from abroad to show them the culture of their countries.
Every team had decided to present the country in a bit different way. Italian team had learned a few worlds in Italian, Spanish team was dancing flamenco, English team entered the venue of the ceremony in the court procession with a king and knights and boys from Greece team had concentrated on the popular dishes of Greece. Everybody was dressed up according to the flag of the country they represented. In previous days they had also made cardboard models of famous buildings of each country. It was great to see how keen they were on gaining the knowledge about the world.

They have learned a lot and collaborated during the whole camp. And like with those cardboard model, at the beginning it was not so clear how to put all the puzzle together to build those great building but with an effort and time dedicated the kids had come up with something really valuable.
Spanish team has won, as they had put a lot of effort into the project, they had even invited a real Spanish man to join them on a presentation! 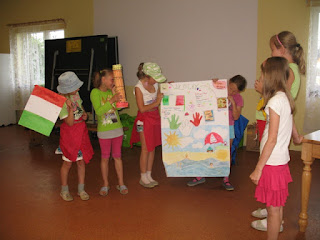