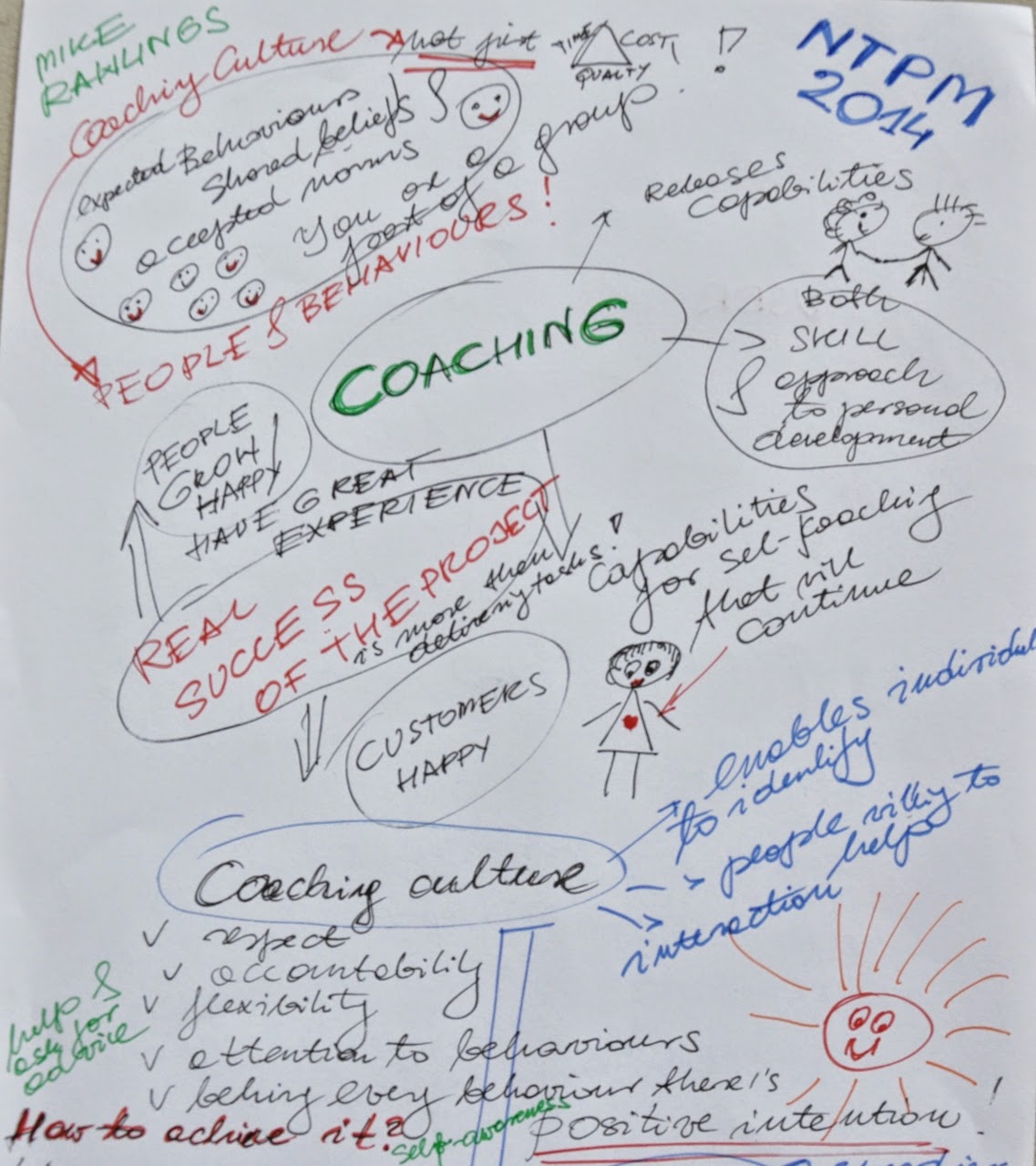 Projects are delivered by people, for people and to people. Delivering to time, cost, scope/quality (gold triangle) does not ensure the project success any more. We need more: “achieving the outcomes that were intended ” something has changed for the better and in a way that was desired.
What’s the definition of coaching? Through effective questioning, coaching aims to raise awareness, have the coachee take responsibility for their actions, and ultimately to improve their personal performance (taken from one of the coaching workshops).
According to Mike: coaching is both a skill and an approach to personal development:
So, a coaching culture is “the collection of expected behaviours, shared beliefs and accepted norms that define what it is to be part of the wider group.”
Coaching culture leads to:
The signs of coaching culture:
One of the questions asked during the session was: Are you a coach or a Project Manager? and the Mike’s answer was both. Yes, I agree! Project Managers nowadays are more coaches and mentors than
managers. I’ve discovered 2 years ago (during one of the NTPM 2012 conference sessions on coaching) that comparing to 20th century, where  80% of PM”s job was controlling and only 20% coaching and mentoring, in 21st century is the other way around: 80% is coaching and mentoring and only 20% controlling. Although Mike did not confirm that, I believe it’s true. During my training sessions I always
stress that we Project Managers do not control people but only project activities and our job is to inspire, motivate and engage the team so they deliver what is expected. Collaboration defined as interaction of team members in such way to develop positive synergy where the team’s performance is greater
than the sum of individual’s performances, is the key to a project success.
Quoting Mike: “A Project Manager can draw upon coaching principles to
How to create the coaching culture? Mike advices as follow:
Let’s start the change!
0
Małgorzata Kusyk
No Comment 0 Share
2020 – Retrospektywa
13 czerwiec 2014
OEES 2019 subiektywnie – współpraca metropolitalna
13 czerwiec 2014
Autentyczne przywództwo w czasach kryzysu
13 czerwiec 2014
Nie trać czasu na kontrolę – zaufaj!
13 czerwiec 2014
Sprawdź jak dużo przemocy jest w Twojej komunikacji
13 czerwiec 2014
Przyszłości nie da się przewidzieć, ale można się do niej przygotować
13 czerwiec 2014